Termites - What you need to know

Termite control is much more than treating the termites you may have found.

There are termite colonizing flights every year; some are successfully established. Which means there is continual threat.

Even inner city suburbs and yes the CBD have constant termite challenges. How come prehistoric insects are still doing what they’ve always done in the hubs of civilization? One might expect insects with the mobility of cockroaches can adapt and survive in a concrete jungle — but termites?

“Termite control” is ongoing. It involves the reduction in termite temptations, building design, monitoring, baiting and regular inspections to name the most obvious.

Termites are a low life form stuck deep in a million-year-old rut of basic instincts.

This makes them predictable. In the prehistoric forest they became good at finding and re-cycling fallen trees; these days much of their forest has been replaced by houses containing some timber (which they still manage to find, often irrespective of chemical and physical barriers). If they can find a way in, they begin their re-cycling as of old.

Same old, same old — just some of the circumstances have changed. They have found their ways into structures in ways we never thought possible and they’ve given a whole new meaning to the term “keyhole surgery” by removing the strength (and $value) of a building through a tiny tunnel back into the ground. The retold stories have achieved for them an almost invincible, mythical reputation.

However, if you have (or can develop) a do-it-yourself attitude by the time you’ve finished reading all this, you’ll be much smarter than termites and…

Your home and investment property are worth a lot of dollars. So it is well worth having your property inspected annually. Because you do not reside at your investment property...you may well decide to use a professional which you may claim a tax deduction for.

For your own home you may make the time to learn the skills to do some relatively simple tasks and perform the inspections yourself.

Let’s begin by ignoring the myths and put termites in perspective.

There are more than 350 species of termites in Australia.

Less than 10 species cause 99% of the $damage by eating the seasoned timber found in houses. Most species prefer leaf litter and dead grass, others prefer the damp, rotting wood inside trees and logs.

Some mound-building termites will attack houses, however the ominous presence of a nearby mound is sufficient reason for any homeowner to physically destroy it — and there’s no more threat from that colony.

To give the significant termites some names should help you separate the main culprits from the nuisances.

Then there are arboreal termites.

These are the ones that build a big nest up in the branches area of a tree. They build tunnels down the outside of the tree and sometimes down the inside decaying ‘pipe’ to get to their moisture source. They will eat grass, leaf litter and rotting heartwood and are seldom interested in the seasoned wood of houses.

Drywood termites usually live in more tropical regions and they absorb their (lower) moisture requirements from the tropical humidity in the atmosphere. An introduced species called Cryptotermes brevis or the West Indian drywood termite is occasionally found and is notifiable to the Australian Quarantine Service who will come and fumigate your house to eliminate it. Drywood termites live within the timber and they kick out their dry faeces through small holes in the wood they are eating. Detecting tiny (less than 1mm) dark brown pellets on horizontal surfaces below the activity is the usual give away.

There are only a few damaging termite species.

How are you going to pronounce, let alone remember those names? Let’s do what technicians do… call them Coptos, Schedos (pronounced Shed-o s) and Mastos.

Your termite risk based on geography 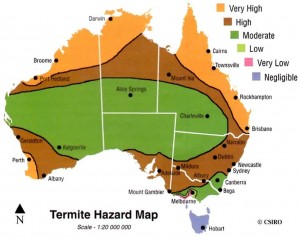 Geographically, the Mastos are mainly found north of the Tropic of Capricorn (Rockhampton to Port Hedland), but the Coptos and Schedos are generally right through and around Australia except for Tasmania. Termites have spent millions of years eating Australian hardwood trees. Settlers used this timber for framing and flooring since the First Fleet 220 years ago. When oregon, baltic pine and later radiata pine and other plantation pines became widely used, our termite trio thanked us very much, often building tunnels over these hardwoods to get to the soft, easier to harvest timbers rather than sticking with the hard stuff.

The chance of your home being attacked by termites.

If you live in Tasmania, you’re probably not reading this and there’s no need to. For the rest of us, the only part of the mainland that is rated by the CSIRO as Low to Very Low is the narrow strip along the Great Ocean Road west of Melbourne. Which means the rest of us are in Moderate to High to Very High risk areas. Another way to put it is that there is a better than 80% chance your home is within 25 metres of a termite colony. About 5 years ago, a CSIRO survey reported 32% of homes had a termite presence. This was been confirmed by the Institute of Australian Architects whose survey in essence said: of all the homes inspected prior to sale last year, one third had some termite damage.

Here’s another significant statistic: less than 20% of homes are inspected or serviced by the professional pest control industry. That means more than 80% of us are blithely believing: “it won’t happen to me”.

If 1 in 3 homes are damaged and yours is one of the other 2… shouldn’t you make a little effort and spend just a few dollars to keep it that way?

Your termite risk based on type of construction

Inner-city tenement style houses have common walls, often common roofs and usually a suspended wooden floor, often very low to the ground. You’d think that with all the bitumen, concrete and pavers cove

ring the ground in these crowded suburbs there would be no place for the flying colonisers to find a bit of wood in soil to start up. But they do. And, because the houses adjoin, termites may enter your home from a nest that entered a house a few doors up the street. The same goes for more modern townhouses sharing walls and roofs even though they may be on concrete slab floors.

Homesteads/Queenslanders may have plenty of space underneath their suspended wooden floors and the piers/stumps with antcaps give you a good chance to observe termite tunnels heading up to the floor. The temptation for us humans is to stack all sorts of stuff under these houses which often gives termites something to eat at ground level and some cover for tracks heading upwards.

Rural homes are constructed of all styles but property owners have added threats: they have more sheds, cattle or sheep pens and ramps, wooden bridges, timber that ‘will come in handy one day’ etc.

Suburban suspended floor houses are the type which are usually set on the so-called ‘quarter acre block’, with brick piers and foundation walls supporting bearers, joists and flooring boards. The walls may be double brick, brick veneer, weatherboard, fibro or other cladding and a timber framed roof. If you crawled under to inspect every year, termite tunnels would be found and treatment applied before much damage was done.

Concrete slab on ground houses began in the early 1960s. They were cheaper to build and builders paid for physical and chemical termite barriers which lulled many homeowners into a false sense of termite invincibility. Now in 2013, re emphasising that only about 20% of homeowners get their homes inspected, therefore 80% of homes are just sitting there waiting for termites to attack, usually from out of the garden, straight in through a weep hole just above the dampcourse with disastrous consequences to your finances.

Multi-storey apartments are also attacked but termite defense is usually delegated to a Body Corporate.The BC then delegates the inspection and control to a professional pest management company. I hope for your sake the company they chose are PestCert accredited… they have reached and are maintaining the highest formal level in pest management.

The Archicentre website once featured a report that said the annual damage bill to homes was about $1billion. The average cost of professional treatment was around $3000 and the cost of repairs was around $5000… Total $8000. One homeowner I know well, refinanced his home to pay a $70,000 bill. Sure, the kitchen was one area that had to be completely rebuilt so he went the extra and put in new, more modern appliances at extra cost. Extrapolating to 2013, the average bill is now probably above $10,000.

Apart from the treatment and repairs, there is also the loss of resale value to be considered. If the prospective buyer receives a report of termite presence or even previous damage they could easily lose all interest in proceeding — or offer you maybe $50,000 less. Then, on top of all this, how do you put a cost on the inconvenience and the heartache?

It’s your home; it’s your job to control ‘your’ termites. The message is plain. Unless you live in Tasmania, you should be concerned about subterranean termites.

They know where you live!

The author Ion Staunton is an entomologist and former pest technician, TAFE teacher and textbook writer, and inventor of the Termite Trap System.

At Strategic Property Management Services, we highly recommend that a qualified pest inspector performs annual inspections of your valuable property. The cost is minimal and your peace of mind is priceless.

We are more than happy to recommend preferred pest inspectors that we use, so please drop us an email or give us a call.

To find out more about termite traps vs barriers click here

For more information about termites go to Ion Stanton's web site at www.termitetrap.com.au